↓
Home→‘Oolites and Thyme’ … connections between Geology, Landscape and Gardening in Chedworth

Ever wondered about the contrasts in vegetation between one side of a hill and the other in the Chedworth area, whether our struggle to grow certain plants in the Coln Valley is not simply due to a lack of green fingers, or indeed how the Chedworth valley came to be in the first place?

Geology and gardening are completely intertwined, with the role of landforms, valleys and rock types in producing unique geographical distributions of plants seen nowhere more clearly than in the Cotswolds.

The Chedworth valley sides are composed of rocks of Middle Jurassic age dating from 165 million years ago, called The Great Oolitic Group, and specifically the White Limestone Formation. This Oolitic Limestone is named after abundant oolites, small rounded particles or grains that look like fish eggs. Oolites are formed by layers of material (usually calcite), that have been deposited around some tiny particle such as a sand grain or fossil fragment and are rolled back and forth in quiet waters – Chedworth lay under a calm, shallow sea and if we look in our garden or house walls, we can find echinoids (sea urchins), ammonites (the round fossils that are often polished) and brachiopods (fossil shells like mussel shells).

At the base of the Great Oolitic Limestones, in the bottom of the Chedworth valley, we can find an older rock formation called the Fullers Earth Formation, and layered within it the Eyford Member, the rock that gives us our roof slates, as it split naturally if quarried and left out over a wet and frosty winter.

The Fullers Earth is mud-like, giving clay soil, and more easily eroded than the limestone above. This forms the valley of Chedworth, and as the different layers of limestone and clay have eroded differently, the limestone being harder, this gives us the terraced fields that we see in Chedworth, such as at Lower Chedworth and Hedgely Bottom. The boundary between the Great Oolite permeable limestones and the impermeable Fuller’s Earth clay also defines the spring line, and hence the dominance of cottages along the valley side at the height for a well to be dug to the spring line.

An interesting fact about the Fuller’s Earth is that it contained a mineral used to remove grease from sheep fleeces, enhancing further the value of the Cotswolds wool ‘grown’ on the Jurassic Limestones.

The base of the Chedworth valley has been filled with Ice Age sediments, with quite a different composition to the limestone valley sides.

And so to the fauna.

The predominance of the Jurassic limestone leads to a dominance of the shallow “brashy” soils of the Sherborne and Moreton series. We find glimpses of the plant life supported on limestone grasslands on the Great Oolite that would have covered this area before the Middle Ages and agriculture ; plants such as field scabious, wild thyme, wild marjoram and wild strawberries. What do all these wild flowers have in common – they love an alkaline soil, generated from the limestone which has a Ph of 8.5 or higher.

This alkaline soil formed from the limestone gives the planting successes and challenges that we have in our gardens today. Many herbs, specifically English lavender (Lavandula angustifolia) and Thyme and sage require not only hot, sunny location but also soils that are low in nutrients, stony and best of all somewhat alkaline. Other plants that love our alkaline valley are lilac, peonies, salvia, alchemilla mollis and Echinacea purpurea.

In contrast, rhododendrons and azaleas require an acid soil with pH about 5.5 … and we shall never see them growing easily in Chedworth! Just at the spring line of the Fullers Earth, the presence of the clay shales at shallow depths leads to the poor drainage of the limestone soils and wet clay as the dominant growing medium – such as in my own garden in Lower Chedworth.

However, we do find patches of more acid soil in the Cotswolds, allowing for a more diverse flora with the best example being at Westonbirt Arboretum. If your appetite has been whetted by this short summary, the Gloucestershire Geology Trust (http://www.glosgeotrust.org.uk) publishes a number of walks in the Cotswolds. 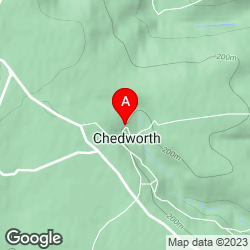